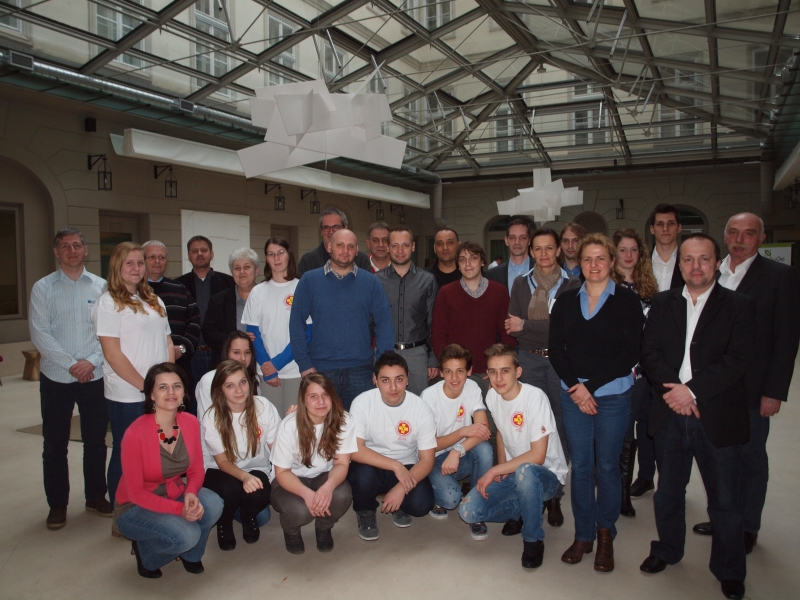 On February 10-12  the project partners held their first project meeting in Budapest and met with Hungarian decision makers. The meeting was hosted by the Hungarian Samaritans of Országos Szamaritánus Társaság Szövetsége (USB).

Guests included Dr. Ágnes Vadai, member of parliament, part of the defence committee, member of OSCE and head of the Hungarian delegation to the NATO parliamentary assembly. In addition, two experts in civil protection from the ministry of the interior, Dr. Tamás Hábermayer and Zoltán Hozbor, spoke about disaster management in Hungary.

The occasion for the meeting was the first partner meeting of the joint flood project the SAM.I. members affected by the 2013 flood: ANPAS, ASB, ASBÖ, ASCR, ASSR, SFOP, USB and WK. The project will be conducted over the next two years with financial support from Aktion Deutschland Hilft and ASB.

The flood disaster of 2013 is an example of one of the biggest aid efforts in the affected countries and demonstrates that the aid and care services of aid organisations face ever new increasing challenges due to cross-border effects of disasters. Hundreds of voluntary helpers committed their time and work during the disaster relief deployments of the SAM.I. member organisations.

“Learn from each other, define common standards and join resources”

Through partner meetings and the exchange of best practices over the two year duration of the project, learning from each other will be particularly put into focus.

In particular, this exchange covers which Samaritan organisations were and ere included in which aid measures in the partner countries during flood disasters and how the cooperation with public civil protection units works.

Over lunch, Dr. Ágnes Vadai, MP, SAM.I. Secretary General Christian Reuter, the SAM.I. presidium and project participants discussed the impact of more frequent natural disaster in times of demographic and social change. In particular, the special needs in case of emergency evacuations for some groups were considered, such as children, people with disabilities and elderly people in need of care.

Dr. Vadai stressed how important it is to put a special focus on the needs and the protection of women in emergency shelters, especially those of migrant or multicultural heritage.

Two representatives of the ministry of the interior also attended the meeting. Dr. Tamás Hábermayer from the national directorate general for disaster management and Zoltán Hozbor, head of the national disaster protection unit (LFR).

Both gave the participants specific and practical insights into the civil protection structures of Hungary.

Special attention was paid to the sequence of operations and the coordination and inclusion of volunteers.

Besides aiming to improve communication with public bodies and decision makers in cases of flood disaster on a national or European scale, the project meeting resulted in plans for two joint training exercises in Slovakia and Austria. National and cross-border aid deployments for floods shall be optimised and joint approaches for new challenges be found. The exercises will be attended by helpers from the partner organisations, including volunteers from the already established FAST teams (First Assistance Samaritan Team).

In addition, the partners aim to develop synergies with another SAM.I. EU project. At the beginning of this year, a joint project by ANPAS, ASB, ASBÖ, ASSR and WK has received a grant from the European Community Humanitarian Office (DG ECHO). This project will create a module that has long been planned: Samaritan Emergency Temporary Shelters – thus the project acronym SAMETS. This project cooperation will, among other things, enable partner organisations to give better aid to children, the elderly or people with disabilities who find themselves in emergency shelters. Also, there will be improvements in taking multicultural aspects into consideration.