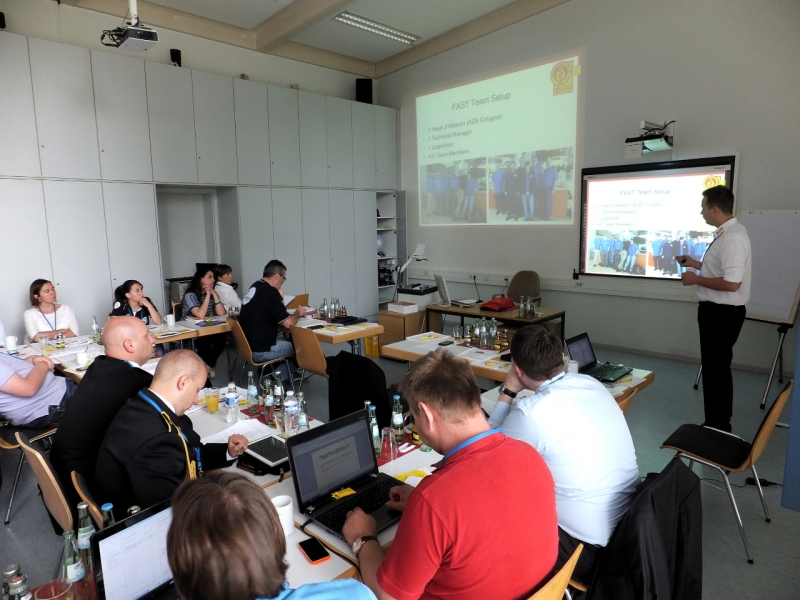 From July 4 to 6, representatives of 7 SAM.I. members and a number of experts met in Wiesbaden, Germany for working meetings of the projects Cross Border Samaritan Flood Preparedness and SAMETS.

The project aims to enable cross-border aid among the Samaritan organisations in case of flood disasters. Among the discussed topics were coordination with public authorities in civil protection in general and particularly in cross-border deployments, as well as the legal and technical difficulties in deploying aid equipment across borders.

ANPAS, ASB, ASBÖ, ASSR and WK are also partners of the SAMETS project, which is concerned with social affairs management in emergency temporary shelters.

The working sessions for both projects were distributed within the same 3 day time frame to enable the two groups to benefit from each other’s expertise and to enable a broader knowledge base beyond just one of the focuses of the projects for everyone.

In addition to the European Samaritans, several experts shared their knowledge with the project partners. The meeting began with a detailed introduction to the civil protection system in Germany and its federal particularities by Jürgen Schreiber, who is a long-time leader of civil protection units and head of ASB Bremen’s training centre for medical civil protection. An overview of the flood activities of ASB in 2013 was presented by Harald Schottner, head of the department for aid organisation and civil protection at the ASB federal office.

In addition, case studies from various departments and branches of ASB Germany were presented. Felix Fellmer, technical and medical leader of the F.A.S.T. emergency aid teams, informed about their flood relief activities in Bosnia and Florian Zeiger, responsible for disaster relief at ASB Mittelthüringen, gave an overview of flood relief in Thuringia in 2013.

Another topic was the in-depth discussion of the special needs of children in case of disaster. It began with an overview of psychosocial care in the German system of civil protection that was given by Rike Richwin of the German Federal Office of Civil Protection and Disaster Assistance. Building upon this, there were additional presentations and workshops, which were conducted by Tita Kern and Simon Finkeldei from AETAS Kinderstiftung and Frederik Schütte from antwortING.

The projects also defined their next steps. The flood project initiated a working group that will meet before the next project meeting and conduct a survey on available cross-border capacities for the project partners. The survey aims to evaluate how coordination and support among SAM.I. partners can be improved. Building on existing services of the partners, gaps in capacities and materials shall be closed.

The SAMETS partners will prepare for the focus point of their next meeting, which will be elderly and disabled people in the emergency temporary shelter.

More pictures from the meeting are available in our media gallery.