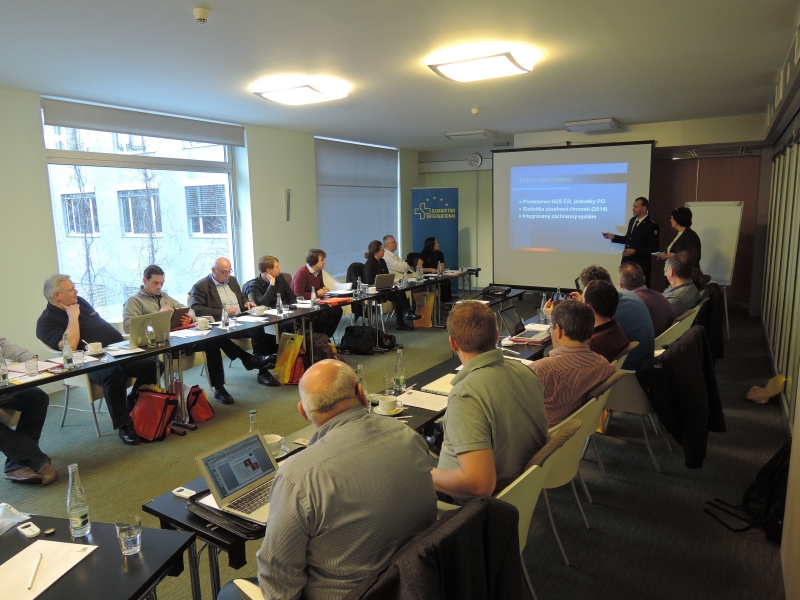 From 9th to 11th February, the eight Samaritan organisations involved in the project Cross-Border Samaritan Flood Preparedness met in Prague, Czech Republic to continue the work on their process chain and alert mechanism.

Czech SAM.I. member ASCR hosted the meeting and used the opportunity to give the Samaritan partners a tour of the facilities and equipment they use in their daily work and which could also be used for flood response.

Several stakeholders of the Czech system of civil protection were present to contribute their expertise to the discussions. Col. Ing. Pavel Nepovim and Ing. Jan Pecl from the Czech General Directorate of the Fire Brigade as well as MD Martin Houdek, Director of Emergency Services Central Boehmia helped to familarise the group with the Czech system of civil protection in general and flood relief in particular.

Considering the fact that most European Samaritan organisations rely on volunteers for their disaster relief, their integration in any possible cross-border assistance scenarios was of particular interest to the project group. The emergency medical system as well as civil protection mechanisms of the Czech Republic are primarily carried by employed paramedics and experts, which is why the issue of integration possibilities in cross-border deployments is vital.

Part of the meetings were held on a boat on the Vltava river. This was done to give the group a first-hand impression of the flood risks in the region of Central Bohemia, as the boat passed areas along the river that were hit by heavy floods in recent years, including landmarks that the group had seen before in a flooded state in a presentation on the most recent disasters. The tour also allowed the partners to see the countermeasures that have been put in place since then.

The group then went on to pick up where they left off at the last meeting in Banska Bystrica, Slovakia. They continued work on the process chain, with particular attention to the alarming and communication procedure. The process chain workshop was once again led by Jürgen Schreiber from ASB Bremen.

Having worked out the complete basic steps of the process chain, the project partners will use the time until the next working meeting to suggest a few final changes. At the upcoming meeting hosted by SFOP in Poland, the final decisions on the processes will be taken.