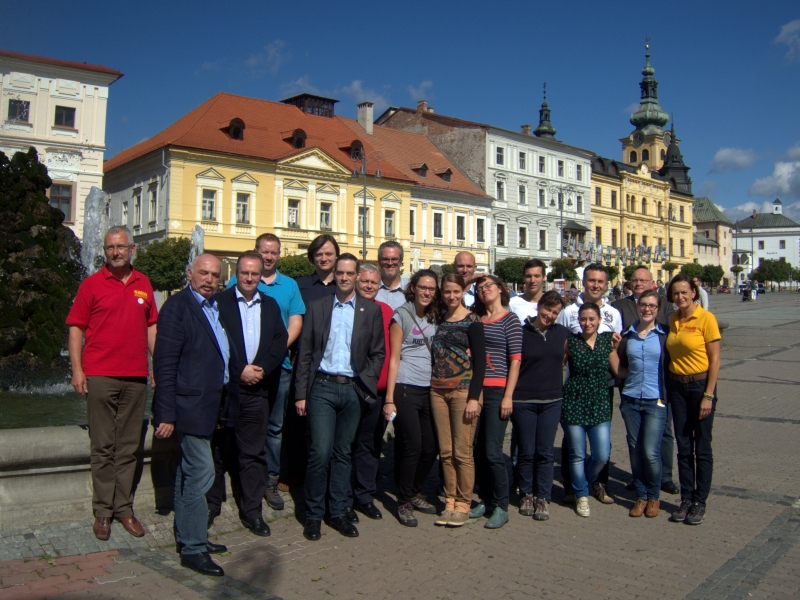 On September 17-21 2014, representatives from 8 SAM.I. members met in Banská Bystrica, Slovakia, for project meetings of the two civil protection projects Cross-Border Samaritan Flood Preparedness and Social Affairs Management in the Emergency Temporary Shelter (SAMETS). They were hosted by the Slovakian Samaritan Organisation ASSR, which is not only a partner in the flood project but also in SAMETS.

Integration with the Slovakian Rescue Forum

Civil Protection Engineer Miroslav Jancek, Head of the Civil Protection Unit in the Interior ministry, personally introduced the international Samaritans to the current efforts to integrate volunteering in more and more aspects of disaster relief in Slovakia. Mr. Alexander Nejedlý, President of the Slovakian fire fighters, also visited the working sessions of the Samaritans to express his support of further integration of ASSR into the national civil protection mechanisms.

Besides the unique opportunity to learn about the Slovakian system of civil protection, the flood project also started the work on a process chain for Samaritan neighbour support. The workshop on the process chain was led by Mr. Jürgen Schreiber from ASB Bremen, who had previously contributed to the project’s working meeting in Wiesbaden in July of this year. The work on the process chain allowed the group to define the next steps for their meeting in Prague in February next year. The partners of the flood project also worked on a survey design to assess each other’s existing cross-border capabilities and potential for improving them.

SAMETS: Focus on elderly people and people with physical impairments

The SAMETS project discussed the psychosocial challenges that the presence of elderly people or people with various physical impairments poses for the management of an emergency temporary shelter. After introductory presentations on psychosocial care in Slovakian civil protection and on what traumatisation in disasters means for the elderly in particular, the partners split into two workshops, which focused on the specific psychosocial needs of the elderly and on the structural and organisational aspects of temporary shelter management adjusted to these needs, respectively.

While the two projects have different main focuses, the joint schedule allowed for the partners to benefit from synergies for specific aspects of each other’s projects. Besides the larger pool of civil protection expertise, another connection point between the two projects is disaster relief for people with physical impairments. Cross-Border Samaritan Flood Preparedness has a special focus on improving flood relief for people with physical impairments of all kinds, meaning that the project explores the needs of this part of the SAMETS target group before they arrive in temporary shelters.

The next meetings are planned for the beginning of next year. Cross-Border Samaritan Flood Preparedness will finalise their process chain in Prague, while the next SAMETS meeting in Vienna will have a special focus on cultural diversity in emergency temporary shelters.