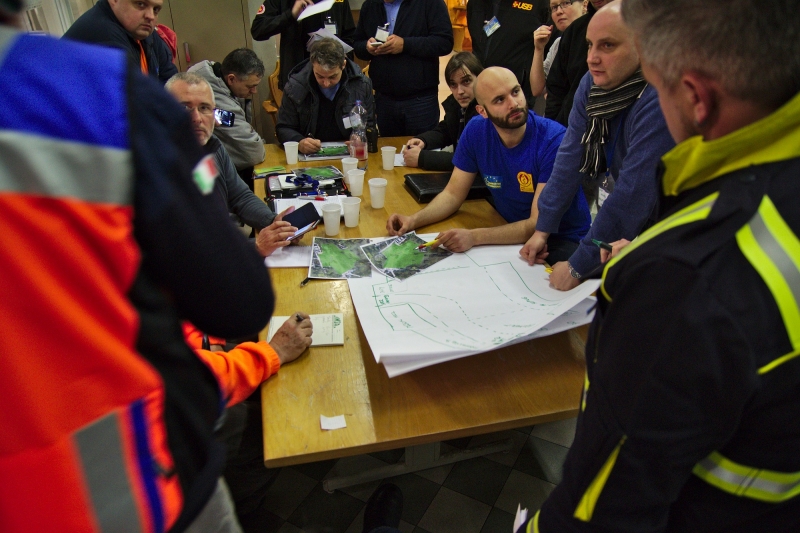 From 25-26 February, the project Cross-Border Samaritan Flood Preparedness conducted the first of its two concluding exercises. After two years of developing procedures for joint Samaritan flood relief, the working results were put to the test.

The cross-border flood relief project was borne out of the devastating floods that affected multiple countries in Central and Eastern Europe in the period shortly before the project began in 2013.Since then, the partners from ANPAS (Italy), ASB (Germany), ASBÖ (Austria), ASCR (Czech Republic), ASSR (Slovakia), SFOP (Poland), USB (Hungary) and WK (Italy) have continuously worked on setting basic joint standards in alarming and information sharing to enable cross-border support in emergencies. At their previous meeting in Krakow, the project group had finalised the process chain for joint deployments.

The exercise which the SAM.I. partners had to complete was a fictional but realistic scenario, which, in preparation for the second exercise, was set in Austria: The inflow streams of the Danube river had breached their banks, flooding populated areas in rural Lower Austria. The teams worked in the headquarters of White Cross, who hosted the event. As the host within the scenario, ASB Austria played the role of the mission coordination.

According to their actual capacities as defined and built-up in the project, the Samaritans planned their work just like in a real emergency. For most tasks occurring within the scenario, the international partners had no choice but to cooperate and support each other to fulfil their assignments. Even though the table top exercise followed a linear order instead of several events happening at the same time, the schedule was tightly packed to challenge the involved organisations.

While the Samaritans did in the end successfully work through all given tasks, the table top exercise did of course also reveal room for improvement and open questions of the defined procedures. These optimisations will be taken into account for the upcoming field exercise in April, which will once gain test the Samaritans’ cooperation procedures. The exercise will take place in Austria and, compared to the table top exercise, will not only focus on planning and command structures, but test the practical capacities as well.

During their stay in Bolzano, the Samaritans’ teams also had the opportunity to learn about the South Tyrolean civil protection system at the Civil Protect trade fair 2016, which coincided with the end of the exercise.

They also visited the White Cross’s booth, where capacities and innovations in disaster relief, rescue and first aid were presented. For instance, they could take a look inside the new field laundry container, which adds this important ability to the White Cross’s civil protection capacities. In the area of first aid, the usage of virtual reality as a learning medium was demonstrated.

Two other Samaritan projects, ADAPT and INDRIX,were also presented to the trade visitors at the fair.